Tamil is largely a phonemic script. However, it is quite rich in allophones. For example, unlike most other Indian languages which phonemically differentiate voiced and un-voiced phones, they are considered allophones in Tamil and hence not graphemically differentiated. Similarly, even with vowels several allophonic variants can be seen.

This tool attempts to analyze allphonic variants in a given Tamil input and produce a phonetically transcribed text.

It must be noted that this converter only corresponds to the standardized pronunciation of Tamil in Tamil Nadu. Sri Lankan Tamil is quite different. For instance «ṟṟ» and «ṉṟ» are pronounced differently in that dialect.

The converter faces the following limitations. They may be overcome in the future.

The following fonts are dynamically loaded from the server to display IPA characters.

Hence, you should be able to view the IPA text without any problems. If you do face problems in display, please install any of the listed fonts locally in your computer

Though this program mainly aims at IPA transcription, you may also view the transcribed Tamil text in several Indian languages. They have been derived from my other tool Aksharamukha.

The converter is also available has a REST API servive.

A POST or GET request must be sent to following URL : http://anunaadam.appspot.com/api with the following parameters:

text: The Tamil text that needs to be transcribed
method: 1 for Narrow and 2 for broad

You can also invoke this tool from the Terminal. Download the source code from Github. It has to be then invoked using the PHP CLI.

In OS X Mountain Lion, the in-built PHP doesn't seem to handle UTF-8 properly. You can install PHP 5.4 using Homebrew and then use it as CLI. 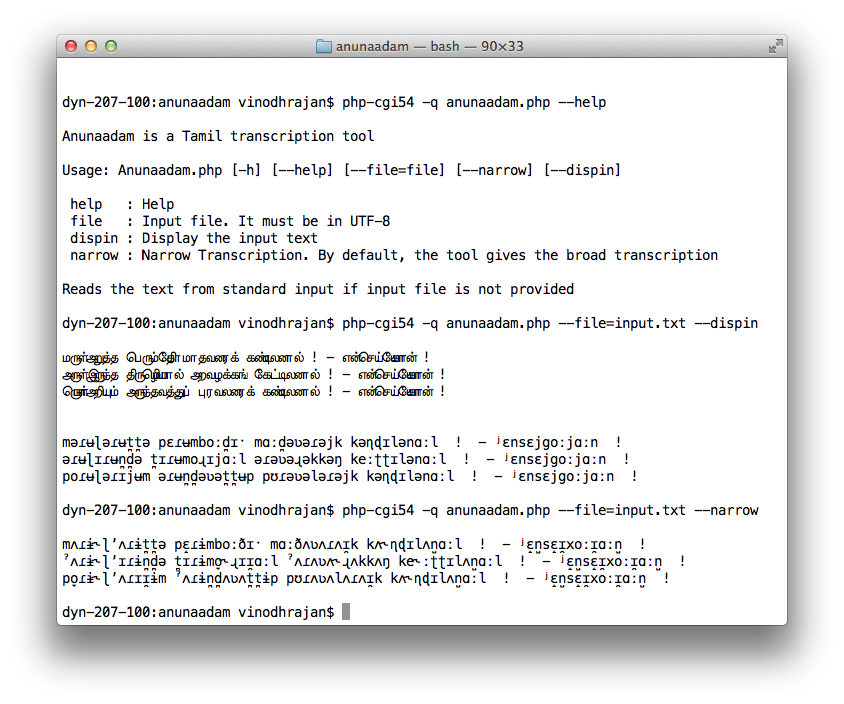 Copyright © 2014 Vinodh Rajan. This software is released under GNU AGPL v3 license. You may read the license here